Its been a hectic week and I have just gotten around to thinking about how well the first Integration Monday went last monday night.  In mid-late 2014 we had started running the UK Connected Systems User Group events online because we found that it was proving difficult to find a venue where we could regularly get enough people to make it worth while.  It was also challenging to arrange speakers.  Moving online opened up some new opportunities so we could engage with speakers globally without all of the cost and logistics of getting someone to come to London.  We also found that people in the UK who were outside of London were able to join the meetings.  We did this for a few months and also found that often people from Europe would join our meetings.

At Integrate 2014 I was trying to line up a few people to speak at our events in 2015 and found there was a lot of interest from people but also there was such a lot of positive energy created about Microsoft integration at this event.  Saravana and I were chatting and we felt we had to come up with someway to keep the momentum rolling until Microsoft release the new wave of technology.  While doing some admin around lining up some events I proposed to Saravana the idea of “why dont we try and do something every week until the BizTalk summit in London”.  At the time it was a bit of an off the cuff comment and in my head I was thinking this is crazy on a Nino level 🙂 but why not give it a shot anyway.  If we did it once per week then we need to try and avoid the Football as in the spring a good champions league game is a killer for a user group event so we went for Monday night.  We also felt that 7:30pm would be a pretty good time because this would allow people outside the UK to join.  At this point Integration Monday now seemed a real idea.

Around the same time I got an email from Charles Young and we had been chatting about Charles speaking at the next user group meeting anyway but this turned into Charles kindly offering to speak at the first Integration Monday event.

We felt too that we needed to do some work to sort out the user group website and a few things to make us better at engaging with people and helping people follow the group and keep up with content so Saravana offered the pretty much full time use of one of the BizTalk 360 team to help get this up and running.  Sriram Hariharan has been working really hard to get the new website up and running and when we announced the first event did a lot of the comms around getting the word out to people.

As registrations came in we quickly saw that we were on to a winner here.  We had expected to get in the region of 50 people but by the day before the event we had 250 people registered and more on a waiting list.  During the week we saw we were going to go past the limit on our existing web meeting provider so Saravana got the BizTalk 360 team to evaluate some other options and funded us using a new platform which we used on the first event.

So we got 250+ registered attendees and eventbrite showed us where some of the people were joining from: 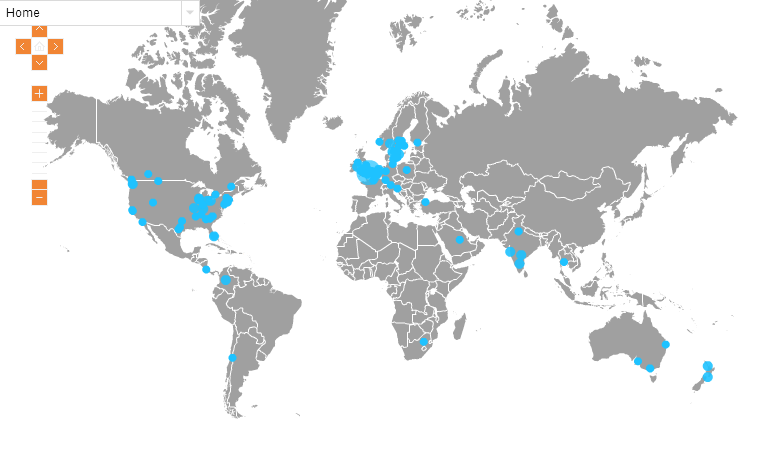 You can see above there is a lot of people in the UK and western Europe but we also had people from all over the world.  I know the guys in Datacom in New Zealand got in touch to say they are hoping to have regular “Integration Tuesday Morning Breakfasts” where they can check out the webcast and have breakfast in the office.

On the night Charles delivered an awesome presentation.  You can check out the video and slides here.  We had around 186 people join us on the night.  The feedback was excellent about the event and really reinforced that this was a good idea and something we need to try and keep rolling.

The plans from here are to have 1 event every monday night (except where there is a UK Bank Holiday) and we have lined up speakers already going well into June and I hope you are really excited about the speaker line up we have.

In order to follow the activity we have lined up the best ways to engage with us are:

Although we have lined up lots of topics already we need to get feedback from people about what topics we want to see and what speakers we want.  This is the key to keeping things going and we will try to stay at least 3 months ahead with the topics so people have good visibility of upcoming activity, but if you have ideas of things you want to see please get in touch.

The next meeting is Sam Vanhoutte who most people will know and is an excellent speaker on most integration and cloud topics.  Sam will be talking this monday night at 7:30pm UK time and you can find out more details on the below link: